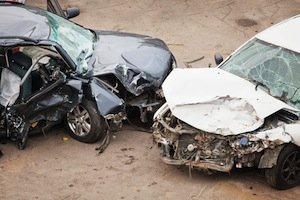 Over the course of a year, Americans spend hundreds of hours in their cars. One only has to look at the congested roadways of Chicago to see this. Cars are an essential part of peoples’ lives and can provide a lot of pleasure and convenience. But as with all good things, there is always a downside – in this case, it is car accidents.

Each year, over 6 million car crashes occur throughout the U.S., with over 400,000 of those in Illinois and Chicago. And, while a fender bender can be an annoyance, a major car crash can be deadly. Regardless of the severity of your collision, having a Chicago car accident lawyer on your side can help negotiate with the insurance companies and make sure you get reimbursed for damage to your vehicle, medical expenses, and any time off from work.

Most car accidents are caused by driver negligence or inattention. Today more than ever drivers are distracted by texting, cell phones and music devices. Many auto accidents are caused by road sign failures, road construction negligence or weather conditions or simply inadvertence. But the results can be deadly in just a flash of a second. Drivers must be alert and drive defensively, but car accidents will happen under the best of conditions.

Robert Kreisman has obtained top dollar for his clients in Chicago car accident cases. A woman who was hit while making a left-hand turn without the right of way obtained the full insurance policy limits for the injuries to herself and her child. An on-duty police officer who was hit by a car running a red light received full compensation for his loss.

At Kreisman Law Offices, the car accident cases are handled diligently, carefully and aggressively. Our office will do what is necessary to make sure our clients are fully compensated in every way for their injuries, permanent loss and wages lost because of injury or death. Where cases come along where the insurance adjuster is unwilling to recognize the full value of a case, the lawsuit that ensues may lead to jury trial. Kreisman Law Offices has successfully prosecuted jury trials for more than 40 years in Chicago and Cook County and surrounding counties.

Alcohol is involved in about 40% of all fatal car and truck crashes. It has been estimated that alcohol-related collisions in the United States cost about $51 billion each year. It has also been found that drivers with a blood alcohol content (BAC) of only 0.02% to 0.05% are seven times more likely to die in a car crash than would be sober drivers. In the last year of data, 2016, 10,497 individuals died in alcohol-impaired driving crashes that accounted for 28% of all traffic-related deaths in the United States. In fact, 1,233 traffic deaths among children ages 0-14 years, 17% of those, 214 died because of alcohol-impaired drivers. Obviously, the consequences of driving under the influence of alcohol is extremely dangerous to drivers, passengers and other drivers and passengers who become the victims of the impaired driver.

Drowsy driving, those who are sleepy or fatigued, account for about 20% of all highway/road deaths in the United States. Most fatigue-related crashes occur during normal sleeping hours and the more severe the crash, the more likely it was that the driver or drivers were too tired to drive. Fatigue is a likely factor in almost one-third of single-vehicle crashes occurring in rural areas. Because of fatigue, one-car crashes resulting in a fatality or severe injury is all too common. A fatigued driver is usually one who has been driving for a long period of time, by example overnight, when the driver should be sleeping under normal conditions. Another cause of driver fatigue is sleep disorders such as sleep apnea, a sleep condition that causes tiredness throughout the day and night.

There are many types car, truck and other vehicular accidents that are caused by distracted driving. Some of the distractions include “lost in thought” while driving. One of the biggest distractions to driving currently is cell phone use or texting. Another distraction is simply a pet or a passenger in the vehicle. Eating and drinking is never considered a safe way to operate a motor vehicle. Another distraction might be adjusting the audio of the radio or Bluetooth or the cooling or heating devices on the vehicle. All of these distractions can lead to serious motor vehicle collisions.

It is estimated that more than 143 million Americans commute to their jobs or other places each workday. 58% of police-reported fatal car accidents involved just one vehicle. In 2016, the deadliest three-hour period of car crashes was midnight to 3:00 am on Saturdays with 1,015 fatal crashes that occurred in that timeframe. There were 1,001 car crashes the same day between 6:00 pm and 9:00 pm. 40% of all fatal car accidents occurred by a vehicle colliding with a fixed object such as a tree, street sign or other vehicle.

In Illinois, there is a Wrongful Death Act for civil cases involving the death of an individual who leaves surviving those close relatives or next-of-kin. The Illinois statute, 740 ILCS 180/2.1 is the Wrongful Death Act. The right to file a wrongful death lawsuit in Illinois is controlled by this statute. Under this law, the children and surviving spouse of the decedent are eligible to file a lawsuit and recover damages. In Illinois, where there is no spouse or children, other relatives such as parents or siblings of the deceased, may file a lawsuit. All such family connection to the deceased are defined as the next-of-kin.

A wrongful death lawsuit can be filed in any situation including car, truck and highway crashes. Wrongful death lawsuits can also be filed in cases of workplace accidents, dangerous or defective products and virtually any number of medical negligence cases, nursing home abuse cases and construction injury lawsuits. Under Illinois law, the eligible parties who bring the case can recover funeral and medical expenses of the decedent, loss of financial support, loss of an inheritance, loss of companionship and emotional consequences of the death.

Rollover car and truck accidents have a higher fatality rate than other kinds of crashes. Of the nearly 9.1 million deaths in a car, SUV, pickup and van crashes reported in 2010, only 2.1% involved a rollover. However, when a vehicle rolls over, nearly 35% of those occurrences result in at least one death. The number of rollover crash deaths has been rising steadily since 2000. There has been an increase of about 9% of the number of passenger vehicle occupants killed in rollover crashes.

One of the principal causes of death in rollovers is roof intrusion injuries where the driver and/or passengers are crushed by the roof of a motor vehicle. Only 2-3% of all vehicles rollover in crashes; however, rollovers account for about 20% of all individuals, passengers and drivers killed in motor vehicle and truck accidents.

In Illinois, hit-and-run incidences are punishable by Illinois law, 625 ILCS 5/11-401 which is the driver of a motor vehicle leaving the scene after an accident that causes personal injury or death to someone else without reporting the crash to the authorities. Leaving the scene of an incident such as one that caused personal injury or death is considered a Class 4 Felony in Illinois and other states. Those who violate this law can face prison sentences up to 15 years and fines as much as $20,000. Generally, hit-and-run accidents are defined as being one involved in a car crash with a pedestrian, another car or a fixed object and then leaving the scene without stopping to identify yourself as the driver or to render aid to someone who might have been injured. Hit-and-run accidents occur far too often in the Chicago area and in the United States.

For example, Highway 63 that runs through Missouri had a fatal crash rate of 0.7 that experienced 158 crashes and 179 deaths in one calendar year. Highway 40 through the state of Tennessee had 437 crashes with a total of 517 deaths on that one highway system. The deadliest highway in the United States is US Highway 1 running north to south along Florida’s east coast. The fatal crash rate was 2.8% with 1,011 crashes and 1,079 deaths for a single calendar year.

A head-on-collision is a traffic crash where the front ends of two motor vehicles such as cars, vans, SUVs or trucks, hit each other when traveling in opposite directions. Head-on collisions occur because of a mistake in identifying lanes of traffic, driver fatigue or driver intoxication. Head-on collisions can also occur because of distracted driving, brake failure or other mechanical failures of a motor vehicle. Head-on collisions are among the most dangerous and serious highway and road crashes because the combined force of the impact is doubled due to the traveling speed or closing speeds of each vehicle. The weight of each vehicle is also considered in the calculation of the forces behind the two vehicles coming together at high speeds or at any speed. The most common injuries that drivers and passengers sustain in head-on collisions include neck injuries, traumatic brain injuries and spine injuries.

If you or someone you love has been injured or killed in a car accident, please call us for an immediate free consultation. With our years of experience in trying and settling auto accident cases, Kreisman Law Offices provides the best possible services to our many clients and achieves unsurpassed results. Please call us 24 hours a day at 312.346.0045 or toll free 800.583.8002 for a free and immediate consultation, or complete a contact form online.